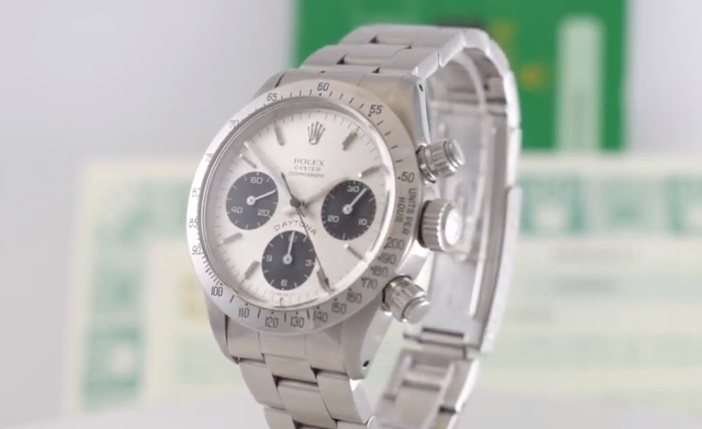 When it comes to estimating value in timepieces, the term “who” is often as significant as the term “what”. What boosts the appeal of a great vintage watch in many instances is its notable wearer. And this time, it is the Rolex Daytona of a racing legend, Carroll Smith that steals all the attention at Christie’s auction “Watches Online: Discovering Time”.

Rolex Daytona is one of the most iconic and coveted models in the brand’s catalogue. The watch enjoys unparallel status and fame in the horology industry. Thousands of people search over the internet almost regularly to find a potential buyer to unlock the accurate value of their Rolex watch.

And choosing the right buyer and process of selling often become smoother and more convenient if the Rolex watch is a Daytona. Potential buyers are willing to pay usually a premium for a Rolex Daytona in excellent condition and with original box and papers.

Nevertheless, Carroll Smith worked with the Ford Motor Company and Carroll Shelby on the GT40 Le Mans Project, and interestingly, Smith was best recognised for this. However, his reliable and regular companion throughout his illustrious career was the Rolex Cosmograph Daytona Reference 6265.

And this legendary watch came straight from the hands of Chris Smith, son of Carroll Smith to Christie’s auction. Smith asserted –

“The watch was a gift from Bill Cuddy, who was a serial businessman and entrepreneur and a semi-pro race driver through the ‘60s and ‘70s. It was a gift because my father was the team manager and engineer for a McLaren M8 CanAm car. The back of the watch is inscribed with the Cuddy Racing logo.”

Quick Look at the History of Carroll Smith’s Rolex Daytona

The legendary racer received this Rolex Cosmograph Daytona Reference 6265 as a gift from the entrepreneur Bill Cuddy. Well, Cuddy had the reputation of being treacherous. He, as well as his son, was in the headlines in the 1970s because they robbed jewellery of the comedian Red Fox’s wife. However, Cuddy was known to have done it for funding his racing ventures.

Bill Cuddy was the owner of many businesses that flourished well with time. But at one time in his life, things went sour, and Cuddy is known to run out of money.

“We actually used to go see him in jail when I was a kid. I was 12 or 13 years old. I’m sure my dad wore the watch, which is kind of funny. It was his daily watch.”

As per the records, Bill Cuddy executed the heist many years after he presented the Daytona to Carroll Smith. However, his son acknowledged that they did not know about the bandit inclinations of Cuddy at that time. Thus, it isn’t easy to speculate from where Bill Cuddy got the money for paying for this Rolex Cosmograph Daytona.

Watch specialist Michael Fossner at Christie’s says, “These guys were adrenaline junkies. They were modern cowboys if you will.”

Carroll Smith’s Rolex Daytona had passed its life in the fast lane. The watch showed scratches and dings. And it is obvious as an automotive racer strapped it regularly. Furthermore, the watch came with a few service parts.

But it did not feature any after-market elements. For watch amateurs, it is significant to note that collectors typically prefer watches with all original parts and no extensive mends. Eventually, these timepieces command higher prices than the ones with after-market components.

However, this Daytona Reference 6265 had undergone a substantial amount of wear throughout its well-lived life. Michael Fossner asserts, “This isn’t one of those watches that was forgotten until somebody decided to make a buck.”

No doubt, the Reference 6265 is an extremely sought-after Rolex Daytona watch. However, what was expected to command the highest value was its provenance. Chris Smith possesses a full photo album for confirming its authenticity.

The album includes a picture that shows Carroll Smith wearing this Rolex Cosmograph Daytona and he is standing beside Terry Knight, the semi-pro racer. Chris Smith says –

“He was the founder and one of the original members of the rock group Grand Funk Railroad. He also had a solo career and went on to produce a lot of big bands. He was a real mover and shaker in the music industry.”

Interestingly, Terry Knight was also known to have an association with the underworld. The photo shows that the men are standing beside a “Norman’s Cay” branded race car. And Norman’s Cay is small Bahamian island and evidently, Knight’s location of choice for his shady deals.

“Norman’s Cay was the island the Pablo Escobar Medine cartel used as their pit stop for their activities. That was the main centre of everything before coming into the U.S. So that was a big thing to do with Terry Knight, but it also shows these guys were a bit rough around the edges. This car was funded by one of the biggest criminal organisations ever to exist.”

However, the racing legend Carroll Smith did not have any participation or hand in Knight or Cuddy’s outlaw activities. Chris Smith professed that he was enjoying his teenage at that time and the two guys were only his father’s friend. He used to venture frequently on bikes with Knight.

He even recalls shooting pool with another iconic personality, Paul Newman, at his house. However, here’s is the more exciting part –

Chris Smith asserts his encounter with Paul Newman after he began following the footsteps of his father. He says –

“Because I knew him through racing, the acting never really came up. But I want to say he was quiet. He was very self-assured and confident, of course, but not gregarious or outgoing. If you didn’t know who he was, you wouldn’t suspect he was anyone of importance other than the fact that he was a striking-looking person.”

Smith enjoyed wearing his father’s Daytona watch for many years. And the fact that the timepiece is appreciating with time made him more comfortable to wear it. He gave up the Daytona for sale at Christie’s online watch auction with the hope that the watch will get its new owner who will cherish its history and “put it out there in the world where it belongs.”