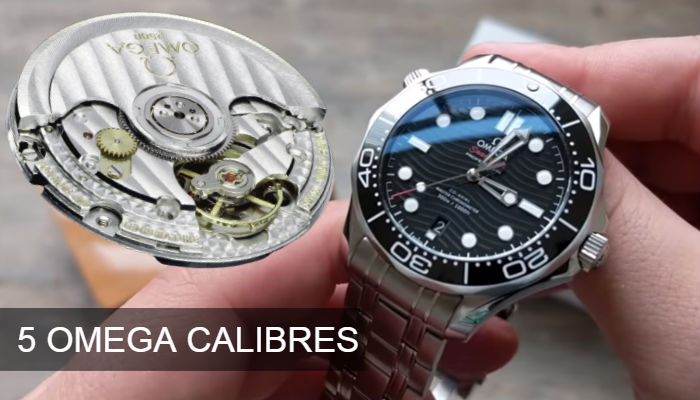 Omega is one of the most ingenious brands prevailing in the market today. The brand significantly emphasises on technical elements and solutions, offering considerable benefit for regular use.

From the movements developed in association with others to the ones produced in-house, some calibres are indeed adored and coveted for their technical advancements.

Here are five of the most significant watch movements belonging to the latest Omega collection. Please continue reading to know about them.

Introduced in 1999, the automatic calibre 2500 was the first Omega Co-Axial movement.

Omega made many technical refinements to Calibre 2500 and also, utilised a special lubricant.

Omega made significant modifications to the movements housed within the iconic Speedmaster Professional “Moonwatch” over the years.

On the contrary, the modern Calibre 1861 features many principles of the pre-moon era’s Omega 321.

The Omega Speedmaster Professional plexiglass version is powered by the Calibre 1861 movement.

However, one interesting fact is that the chronographs with the Calibre 9300 feature the stop minute as well as hour on the right totalizer.

The Omega 8900 movement is the first movement that received certification from the Swiss Federal Institute of Metrology or METAS.

The COSC indeed test a watch’s precision in several temporal conditions. But no such test is carried out to imitate the natural wearing of a timepiece.

However, the Calibre 8900 is now equipped only in the Omega Constellation Globemaster models.

The Omega 8520 Calibre comes in a smaller size. Regardless, the movement provides incredible durability and accuracy.

While the gold’s weight is dramatically higher than steel, this contributes a lot in a smaller calibre such as the 8521.

Do you want to sell watches in London?

Selling a luxury watch should be simple and hassle-free if you choose any trusted watch buyers in London or any other big cities.

The Luxury Hut offers a quick, secure and straightforward way to sell watches online or via appointment.

With professional evaluators always on hand, we ensure to buy luxury watches of prestigious brands like Rolex, Omega for the best price possible in the market.

What is the value of my watch? How to sell my watch in the best way?

For those who are looking for the answers to the above questions, simply fill up the online form now. You will receive a free valuation immediately.

If you are happy with your initial quote, send your watch to us. Or call on 0207 242 5411 to book an appointment and visit our office in Hatton Garden, London to complete the transaction in-person.

From visiting our office to getting paid, the entire process may take as little as an hour to complete.