Louis Cartier designed and developed the Cartier Tank nearly 100 years ago. Interestingly enough, the French watch manufacturer crafted such an incredible watch that indeed dominates in the horology industry. Indeed, the unique aura of the Cartier Tank yet intrigues watch aficionados across the world today. Now, like many others, you may also wonder: 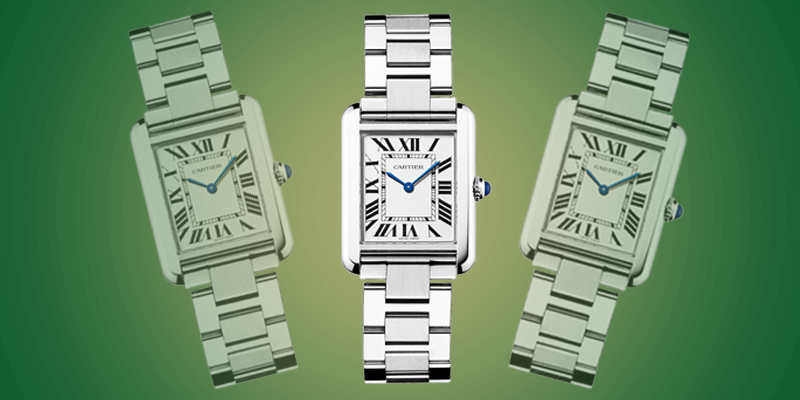 How does this watch remain esteemed a century after it made its debut?

Ideally, the reason behind the Tank’s success is an innovative design that could combat the test of time. More significantly, the watch not only outshines as a valuable watch but also as an exceptional piece of jewellery. And, with such a unique design trait, the Cartier Tank became the world’s first unisex timepiece. Today, we have listed five interesting facts that you probably didn’t know about the Cartier Tank. Let’s take a look!

Want to sell your watch? Get in touch today with the most trustworthy watch buyers in London and receive a free valuation immediately.

Cartier’s Tank illustrates the brand’s personal inclination for clear and simple forms of the second French grandeur – a precursor of Art Deco. The watchmaker is known to boost performance-oriented pragmatism consistently with the usual avant-garde style of the House for creating an alluring new design concept.

Two beam-like posts resemble chain links of caterpillar trails. The posts extend visually to the rectangle sides, enabling the bracelet to fasten to the case flawlessly. However, Cartier wouldn’t have been what it is today also without its precise inner workings. The Cartier Tank watch housed a movement, acquired from Edmond LeCoultre – the master of thin movements. Moreover, it featured an iconic silver dial with enlarged Roman numerals.

2. The Tank was One of the First Wristwatches

Yes, it is true. When Louis Cartier presented the handmade archetype of the rectangular watch in 1917 to John Pershing, it was indeed one of the first wristwatches ever produced. The story goes like the ingenious Abraham-Louis Breguet conceived the first wristwatch for a noble lady nearly 100 years ago. However, Breguet’s perception for the wristwatch style was more of one type of jewellery making instead of a novel form of time-telling. But, Monsieur Cartier recognised the intimations of changes to come, and he developed a genuine wristwatch in 1904.

3. The Tank is the First Unisex Watch

The Cartier Tank became the ‘Ambassador between the sexes’ soon after its production. The manufacturer produced only a few models in 1919 for the official launch. However, the number of new watches increased up to a quarter of the total wristwatch production of the brand, and they were initially just men’s models.

Subsequently, Monsieur Cartier also launched the Cartier Tank watch for women. One famous example is the Tank Chinoise, introduced in 1922. The timepiece flaunted Oriental designs that were the latest rage at the time.

4. The Tank is one of the Most Famous Watches among Celebrities

The Cartier’s Tank is ideally unparallel in its pre-eminence factor. The watch has flaunted the wrists of significant avant-garde artists, political leaders, intellectuals as well as the fashion elites. Moreover, the Tank’s celebrity circle includes also Jacques Chirac, Jackie Onassis, Princess Diana and many others.

5. The Root of Cartier Tank is fairly firm

Although trends come and go, Cartier’s Tank illustrates higher adaptability to dynamic fashion. The watch has set new rage without diverging from its roots. Notable examples include the specifically slim Les Must de Cartier watch in the 1970s that set the standard of the time. Moreover, Cartier crafted a brand-new Tank Americaine in 1989 that was based on the Tank Cintree watch of 1921.

However, the year 2009 was an important year for the Cartier Tank from a technical perspective because the brand introduced the symbolic Tank Americaine Tourbillon Volant. The significant fact is that this Tank Americaine is the first-ever watch in the collection that houses the Cartier’s in-house 9452 MC movement along with a flying Tourbillon.

How Cartier Became A Serious Watchmaker?