11 Facts You Should Know about Rolex

Rolex is the world’s most recognised luxury watch brand, popularly known as the ‘king of watches’. The worldwide recognition of this brand is the result of decades of success in a variety of fields. Rolex is one of the leading names in the luxury wristwatches, according to Forbes. From early records of timekeeping to its notable appearances in films and association with Paul Newman, James Bond and other personalities, this prestigious Swiss brand has always focused only on watchmaking. As the most valuable and collectable watch brand so far, here are few things that all luxury watch collectors should know about Rolex. 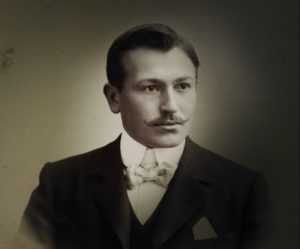 Hans Wilsdorf and his brother-in-law and business partner Alfred Davis in 1905 established Wilsdorf & Davis Ltd. in London. Later, the trademark ‘Rolex’ was registered by Wilsdorf in 1908, and he opened an office in the La Chaux-de-Fonds, Switzerland. In 1915, the company name was officially changed to Rolex. There may be many stories about the origination of the name ‘Rolex’, but Wilsdorf did not confirm any of these by himself. For example, it is said that Wilsdorf followed George Eastman who began a trend of short, invented brand names after he gave the name ‘Kodak’ for his own company. No matter where the name ‘Rolex’ originated, it has undoubtedly become famous. 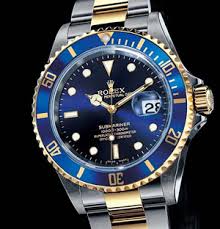 The first watch in the world that got the Swiss Certificate of Chronometric Precision in 1910 is a Rolex.  The Official Watch Rating Center in Bienne granted it. Rolex launched its famous Oyster, the first waterproof watch in 1926.

In 1945, the brand introduced the first self-winding wristwatch, Rolex Datejust. The watch’s dial has a window that shows the date. Later, in 1947, Rolex became the first timepiece for breaking the sound barrier on the pilot Chuck Yeager’s wrist.

In 1953, the brand brought out the Rolex Submariner that was the first watch manufactured for divers, waterproof up to a depth of 100 meters. In the same year, Rolex accompanied Sir Edmund Hillary and Tenzing Norgay to reach the summit of Mt. Everest. 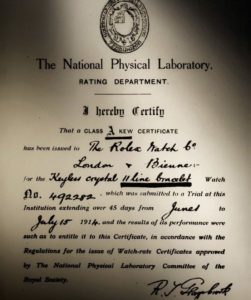 Previously, ships used to rely on the marine chronometers for navigating. In those days, timekeeping accuracy was not only an essential concern to sailors but also to the entire nation. Manufacturers produced their exquisite handmade and adjustable marine chronometers and sent them for testing at the astronomical observatories, like those at Geneva, Neuchatel, Kew and Besancon. Out of all, Kew allegedly applied the strictest of all standards. The Chronometers that performed outstanding received the Kew A certificate.

For the very first time, a Rolex wristwatch was granted the Kew A-class certificate in 1914. The brand submitted a string of 145 small wristwatch movements to the Kew Observatory during the 1940s for testing, and 136 of them got the Kew Class-A certificate. It was the first-ever wristwatch to fulfil all the requirements that are expected from the best marine chronometers. Without any doubt, Rolex timepieces are today one of the most sought-after brands among the watch collectors.

Everything is manufactured in-house 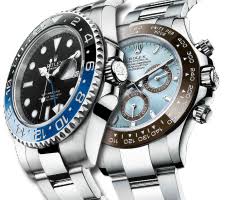 Rolex produces almost everything in-house. Not all brands can compete with the in-house production level of Rolex. The brand makes approximately everything in-house in own way and with a particular terminology. Most of the parts are manufactured in one of their present three mega-production plants, namely Geneva, Plan-Les-Ouates, and Bienne.

Rolex has their factory that produces own exclusive alloy for Everose gold (pink gold) and gold. The brand also introduced ceramic bezels, and the 2008 GMT-Master II was the first model to feature it. It produced watches that featured monochromatic bezels and later, it achieved to combine different colours with GMT-Master II BLNR and GMT-Master II BLRO.

Other in-house inventions of the brand include the ‘blue hairspring’, innovative escapements, rubber straps, luminescent paint, extensible buckles for bracelets and shock absorbers. 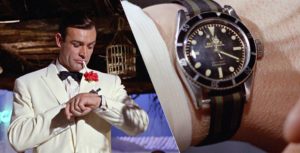 The most popular association of Rolex is with the fictional character, James Bond. Ian Fleming, in his original 14 Bond books mentioned just one brand name belonging to 007 – Rolex. Naturally, Bond wore Rolex when he appeared on the big screen. There may not be accurate information about the models that appeared in the movies. The Bond films where Rolex made an appearance are namely Dr No, Goldfinger, From Russia With Love, Thunderball, Live and Let Die, On Her Majesty’s Secret Service, License to Kill and The Man With the Golden Gun.

Watch collectors know the watch as the ‘James Bond Sub’, and it is believed that it belongs to the reference no. 6538 that was manufactured from 1954 to 1959. Some also consider all the early Rolex Submariners that do not have crown guards as the James Bond Subs. 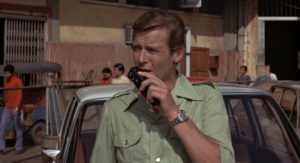 Rolex watches may have appeared in over 100 movies. Here are the ten non-Bond films where this luxury watch appeared. 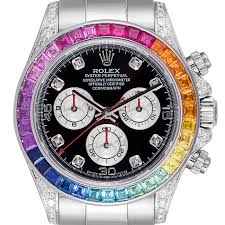 Rolex is famous for its two global charitable programs; one is The Rolex Awards for Enterprise and the other, The Rolex Mentor and Protégé Arts Initiative. The Rolex Awards for Enterprise was introduced in 1976 that offer financial support to the people who work in the fields of science and medicine, exploration and discovery, technology and innovation, cultural heritage and environment.

Rolex Awards launched the Young Laureates Program in 2009 to encourage innovation in the coming generation. Creative young individuals are selected and provided with funds and resources to carry on their projects. Since then, individuals in over 60 countries are presented 110 Rolex Awards. For example, a recognised project includes a system that carries out screening of mass health in newborns, progressing fast laboratory tests for detecting ‘superbugs’ and making Braille smartphones and a campaign of public awareness designed to decrease the mortality rates of children.

The Rolex Mentor and Protégé Arts Initiative were introduced in 2002 where young artists are presented with internationally recognised masters. It sponsors them for spending one year in a one to one mentoring relationship. When it was launched, nearly 234 individuals from over 40 countries participated in it. 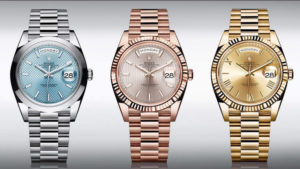 Rolex is one of the most collectable brands to date. A Rolex with reference no. 4113 sold for approximately 9, 94,962 Euro or 1,035,000 CHF at a Christie’s sale, Geneva in May 2011. This watch was made in 1942, and it was enormous for its time. Its diameter is 44mm, and the stainless steel case did not prevent it from achieving the success. After this sale, many other Rolex watches have crossed the standard 8, 54,900 Euros at auction.

In the next month, a Rolex watch in steel reference no. 8171 with a diamond set dial, triple calendar and moon phases sold for 9, 79,335 Euro. This watch was nicknamed ‘Big Frying Pan’ or ‘Padellone’ by Italian watch collectors because of the 38 mm diameter, and it was too large for its time. In May 2014, a Rolex of 18k gold was sold by Christie’s that had star hour markers on its cloisonné enamel dial. The watch was made in 1949 and sold for approximately 10, 62,347 Euro.

Last year, a Rolex Paul Newman Daytona that was originally owned by Paul Newman sold for approximately £1, 28, 28,750 at an auction of Philips’ Winning Icons, New York. It is not only the most expensive watch but also the costliest Rolex wristwatch that ever sold at an auction. 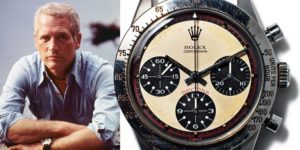 The Rolex Daytona with exotic dials was not much famous when they first appeared. Only a few were sold, and today, few of them are available. The rare dials production started in the middle of 1960s, and they came out on six references like 6263, 6265, 6264, 6262, 6241, and 6239. Moreover, the dials were made of black and white, and some of them also featured the red colour.

It is said that the cover of a top Italian magazine showed off an image of Paul Newman wearing the Rolex Daytona watch. Although this story is probably not true, the celebrity was photographed wearing a Rolex Daytona with the striking dial on many occasions. Rolex ‘Paul Newman’ Daytona watches, today worth much more than their weight in gold. 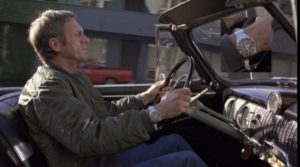 Rolex is also associated with the racing driver and iconic actor Steve McQueen. His name is often associated with the original model 1655 Rolex Explorer II with a big orange hand. However, there are probably no pictures of McQueen wearing this watch. It is possible that the dealers who wanted to generate interest in this watch made the association.

Excellent precision at the bottom of the Challenger Deep 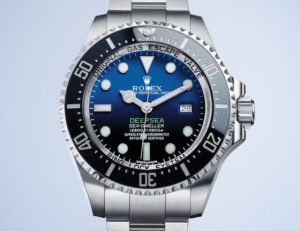 Mariana Trench is the deepest spot in the oceans of the world, and its deepest part is the Challenger Deep. The bottom of the Challenger Deep lies approximately 35,800 feet below the surface, where the water pressure is nearly 15,750 psi or 1,086 bars. For the first time, Rolex reached that depth in 1960, when the Swiss-designed bathyscaphe Trieste was piloted to the bottom by Jacques Piccard and Don Walsh. An experimental Rolex Oyster model, the Deep Sea Special was attached to the hull of the Trieste. After Jacques Piccard returned to the surface, he sent a telegram to Hans Wilsdorf confirming that the watch worked precisely even at a depth of 11,000 meters as it does on the surface.

In March 2012, Rolex accompanied the filmmaker James Cameron to the depth of Challenger Deep. This specially-made experimental watch was attached to the submersible’s exterior and was named as Rolex Deepsea Challenge. The name was given in respect to its triple heritage; one is to the name of James Cameron’s project, second is to the 1960 Deep Sea Special model that accompanied the Trieste and lastly, to the Rolex Deepsea 2008 watch that offered the technical, conceptual and aesthetic blueprint to the experimental timepiece.

Rolex introduced the Deepsea D-Blue Dial watch, paying tribute to the Cameron dive. The timepiece has a unique deep blue dial on its top that gently fades to black at its bottom, representing the change in the colour of the oceans from the surface to the bottom.

Unlike other watch brands, Rolex is a world of its own; a name that is admired, respected, valued and known world-wide. If you sit back and think about Rolex, you will find it hard to believe what Rolex is and what Rolex does.