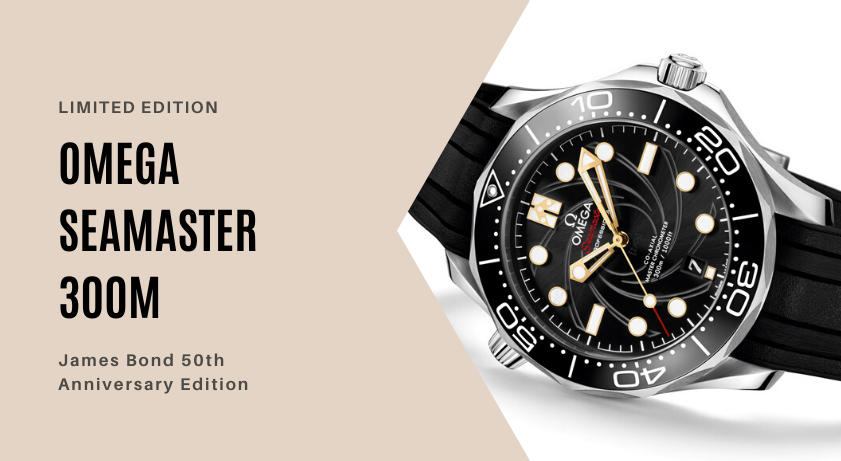 Omega has been the official watch of James Bond since the 1995 film ‘GoldenEye’. The actor, Pierce Brosnan in this film wore a Seamaster 300M Professional that featured a blue dial and Omega’s patent wave pattern. Eventually, this watch, as well as all its latest iterations, is referred to as the ‘Bond Watch’. Now:

Omega recently launched a limited edition Seamaster Diver 300M to commemorate the 50th anniversary of the film ‘On Her Majesty’s Secret Service’. Released in 1969, George Lazenby played the role of James Bond for the first time, signalling the end of the Sean Connery era.

However, the year 1969 was also of a great significance horologically. Why? It was the year when the Omega Speedmaster Professional first stepped on the moon surface. Thus, to commemorate the 50th anniversary of the moon landing and more significantly, the 50th anniversary of James Bond’s ‘On Her Majesty’s Secret Service’, Omega introduced the Omega Seamaster 300m 50th Anniversary Edition.

Omega released a brand-new Seamaster James Bond watch especially for celebrating the 50th anniversary of the 1969 James Bond film ‘On Her Majesty’s Secret Service’. Based on George Lazenby’s appearance in the role of 007, the manufacturer has used many 007-based themes to design its limited-edition timepieces.

For example, Omega has employed the logo ‘007’ as a dial pattern. The logo also served as a counterbalance for the seconds-hand or maybe, as an hour index. However, the theme for the all-new Seamaster anniversary edition is the ‘Bond family coat of arms’, with the maxim ‘Orbis – Non – Sufficit’ meaning “The World is not enough’.

Omega has equipped the new Seamaster James Bond watch with several exclusive features that call out to the film. However, one of the components that are ideally more unusual is the dial.

Interestingly, the 10 o’clock luminous plot features a ‘secret signature’. Here the number ‘50’ crop up inside the luminescent circle.

The new Omega Seamaster Diver 300M in stainless steel features a 42mm case, a black PVD on the black ceramic dial and is limited to 7,007 pieces. Moreover, the brand has fitted an 18ct yellow gold plate to the case side at 9 o’clock. The dial also features 18ct yellow gold applied indexes and 18ct yellow gold hands.

However, the watch is water-resistant up to 300m. Besides, the new Omega Seamaster 300M 50th Anniversary Edition watch runs on the brand’s patented 8800, offering a 55-hour of power reserve. Interestingly enough, it sports all the classic innovations of the brand, including anti-magnetic properties and Co-Axial escapement.

To conclude, the CEO and President of Omega, Mr Raynald Aeschlimann designates the watch as ‘A fitting tribute to a classic Bond film and one of cinema’s most iconic characters’.

Where can I sell my watch in London?

While there are many places where you can decide to sell your watch, trustworthy watch buyers at The Luxury Hut provide a simple and straightforward way to sell watches for competitive prices. We determine the accurate price of a timepiece based on the secondhand market and other essential factors.

Thus, for those who are looking to ‘How to sell my watch in London’ and receive a price quote, follow these three steps below: