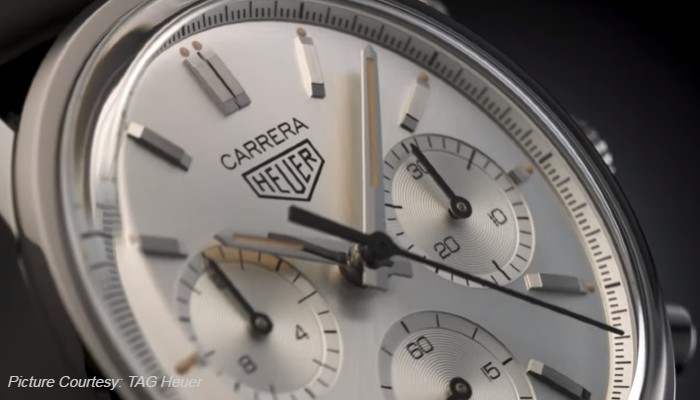 For 2020, TAG Heuer refined and upgraded its iconic Carerra collection to celebrate its 160th anniversary. It’s no secret that the watchmaker unleashes new watches for commemorating anniversaries. This time, it introduced a limited-edition watch dubbed the TAG Heuer Carerra 160 Years Silver Limited Edition.

However, TAG Heuer designed this new special edition taking inspiration from the original racing-styled Carerra chronograph – the Reference 2447S. Both watches appear almost similar to one another. But the current limited-edition watch comes with some different contemporary features.

Want to sell watches in London? Call on 0207 242 5411 and get an instant free competitive quote over the phone.

However, there are two subtle differences between the original Reference 2447S and the new Carerra watch.

The Most Significant Update

Many watch collectors might be happy to see that the new TAG Heuer Carerra 160 Years Silver Limited Edition is almost a direct mimic of the first Carerra.

However, TAG Heuer has designed the new special edition Carerra watch, keeping in mind 21st century. Ideally, the most significant difference between the two models lies in the movement.

Moreover, the ultra-thin Heuer 02 movement has a power reserve up to 80hours, offering improved precision and durability.

While the current Carerra Anniversary model houses the new movement, the watch features the second indicator at 6 o’clock side rather than 9 o’clock.

The case-back flaunts a lacquer-filled stamp, designating the timepiece as an anniversary limited-edition.

How to sell a watch for the best price?

Selling a luxury watch may feel initially daunting, but when you choose professional watch buyers to sell your watch, the process becomes smooth.

Trusted watch buyers like at The Luxury Hut offers a quick, secure and straightforward way to sell watches online or via appointment.

Whether you want to sell a TAG Heuer watch or any other luxury watches, you can rest assured that you will obtain the best price possible for it. Our process is simple.

Alternatively, call on 0207 242 5411 to book an appointment at our Hatton Garden office in London and sell your watch in-person.